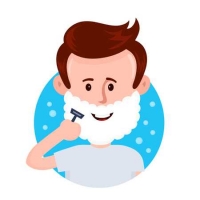 A good shave has been coveted for thousands of years. It started in the Stone Age, when sharpened flint-blade razors edged out Neanderthal seashells for hair removal.

Egyptians obsessed over hair removal in 3,000 B.C. They regarded a clean-shaven face as a sign of good breeding. And during the reign of Alexander the Great in 330 B.C., Greeks and Romans emulated the Egyptians by shaving their heads and beards. Across the ocean, Aztecs shaved with razors made from volcanic glass (obsidian).

Then came the breakthrough: In the late 1600s, steel blades were introduced in Sheffield, England. We waited 300 years, for the next innovation, when in 1929 Col. Jacob Schick marketed the first electric shaver.

In the 1960s, disposable razors hit the market, and in 1971, Gillette began selling a twin-blade razor. Then, in 1998, Gillette introduced the Mach3 triple-blade shaver—after spending a reported $750 million to develop it.