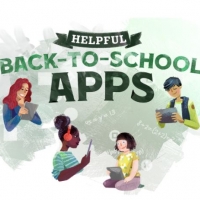 With our “back-to-school” schedules we are all looking for a little added support when it comes to school for kids of all ages.