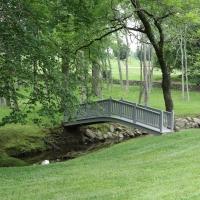 For 40 years, two friends lived on adjoining farms, separated by a wide creek. One day the friends began to fight over a petty thing and their long friendship fell apart. The misunderstanding grew into bitter words and finally, silence.

Weeks later there was a knock on John's door. He opened it to find a man with a carpenter's toolbox. "I'm looking for a bit of work," said the carpenter.

"I have a job for you," said John. "Look across the creek at that farm. That's my neighbor, Albert. We used to be good friends, but that’s all over now.” John’s face twisted into a dejected frown. “See that pile of lumber by the barn? I want you to take that lumber and build me a tall fence, so I won't see his place anymore."

The carpenter said, "I think I understand the situation. Show me the nails and the post-hole digger and I'll do a job that pleases you." John helped the carpenter get the materials ready, and then he went into town, leaving the carpenter to his job.

The carpenter worked hard all that day, and at sunset, the farmer returned. When he saw the work, his jaw dropped.

There was no fence there at all. Instead, there was a bridge stretching from one side of the creek to the other. And coming across, his hand outstretched, was Albert.

"You are quite a fellow to build this bridge after all I've said and done," called Albert.

The two friends met in the middle, taking each other's hand. They turned to see the carpenter hoisting his toolbox on his shoulder. "No, wait! Stay a few days. I've got other projects for you," said John.

"I'd love to stay on," the carpenter said, "but, I have more bridges to build."