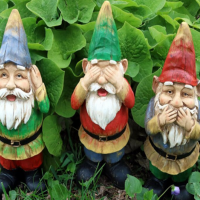 Bring out the Gnomes

“April showers bring May flowers,” which means it’s time to bring out the garden gnomes to tend the garden. But where did garden gnomes come from in the first place? The first garden gnomes were made in Gräfenroda, a town known for ceramics in Thuringia, Germany in the mid-1800s. Philip Griebel made terracotta animals as decorations, and produced gnomes based on local myths as a way for people to enjoy the stories of the gnomes’ willingness to help in the garden at night.

The garden gnome quickly spread across Germany and into France and England, and wherever gardening was a serious hobby.

Griebel’s descendants still make them and are the last of the German producers. Garden gnomes were first introduced to the United Kingdom in 1847 by Sir Charles Isham, when he brought 21 terracotta figures back from a trip to Germany and placed them as ornaments in the gardens of his home, Lamport Hall in Northamptonshire. Only one of the original batch of gnomes survives: Lampy, as he is known, is insured for one million pounds (about $1.733 million CDN).