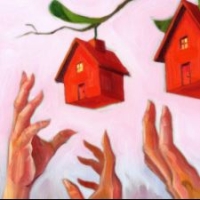 Canada's housing supply crisis – how bad is it?

You may have heard it already, but Canada’s housing market is currently being gripped by an inventory problem. As demand for housing surged during the COVID-19 pandemic, the lack of supply on the market was thrown into sharp light – and by the beginning of this year, inventory across the country had hit a new record low.

Canadian Real Estate Association (CREA) senior economist Shaun Cathcart said in the middle of January that there were fewer properties listed for sale in Canada than at any point on record, with that likely to result in a further spike in home prices in the near future. That coincided with new figures from the Canada Mortgage and Housing Corporation (CMHC) that revealed the annual pace of housing starts in the country had fallen 22% in December compared with the previous month.

The seasonally adjusted annual rate dropped from 303,813 units in November, the body said, to 236,106 a month later. The urgency of the problem has been noted in many quarters. Cathcart said in a statement that an “aggressive national push to build more homes” was required to deal with the issue, indicating that unprecedented measures would have to be taken to ease the current imbalance between supply and demand.

“It will probably have to be a greater amount of building than anything we’ve ever undertaken,” he said. “A touch over the status quo won’t touch it. Royal Bank of Canada (RBC) senior economist Robert Hogue, meanwhile, has said that the number of new starts in Canada would have to triple in order to alleviate those inventory issues. Indeed, that record-low level of supply in Canada’s housing market is one that stacks up unfavourably in an international context, with Scotiabank highlighting the fact that the country’s population-adjusted housing stock is the lowest in the G7.

Jean-François Perrault, the bank’s senior vice president and chief economist, said in January that the problem was especially pronounced in Ontario, where over 650,000 homes were required for its ratio of dwellings to population to get back on par with the rest of the country. Still, it’s not all bad news. Perrault highlighted that housing starts had actually risen noticeably in 2021 despite that sharp falloff at the end of the year and said that “efforts across the country to address the supply deficiency are multiplying.” That said, he emphasized Scotiabank’s view that current housing shortages relative to the needs of the population would continue to place “upward pressure” on prices and rents, ultimately reducing affordability with much action by policymakers required to help bridge the supply-demand gap.

Speaking with Canadian Mortgage Professional, BMO Financial Group chief economist and managing director Doug Porter (pictured top) also said it was important to recognize that despite the current lack of inventory, housing construction had proceeded at a strong pace in 2021. CMHC said that the number of housing starts had risen 21% year over year to just over 244,000, signaling the highest-ever level of new home construction in Canada. That had been spurred by condos and apartment buildings, which made up around 60% of new construction, with multi-residential starts increasing by 19% and detached starts rising about 28%. “I think oftentimes when people are talking about the real estate market, they talk about a lack of supply to [mean] new listings,” Porter said. “From our perspective, the amount of new listings has actually been relatively robust over the last year.” Rather than supply, Porter said that the real issue was the demand for housing that had become supercharged in recent years, with the investor side particularly strong of late due to the rock-bottom interest rates that have been a prominent part of the COVID-19 era. That was also partly a result, he said, of the fact that many people have been seeking to make investments due to balance sheets being strong during the pandemic and plenty of cash on hand.

“Study after study in recent months has shown that investors have played a huge role in this,” he said. “Admittedly there isn’t enough supply to meet that seemingly insatiable demand from investors – but what’s really out of line here? Is it that we’re suffering from a shortage of supply, or we’ve got this overwhelming demand? “I lean very heavily to the view that this is more of a demand story that’s largely being fueled by these extraordinarily low interest rates.”