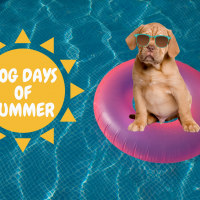 The phrase “dog days” refers to the sultry days of summer, usually July and August. But where did the term dog days come from?

The Romans associated hot weather with the star Sirius because it is the brightest star in the summer night sky. They referred to those days as dies caniculares, or dog days, because Sirius is in the constellation Canis Major (Large Dog).

The dog days originally were the days when Sirius rose just before or at the same time as sunrise (heliacal rising), which is no longer true, owing to precession of the equinoxes.

Dog days were popularly believed to be an evil time when "the Sea boiled, the Wine turned sour, Dogs grew mad, and all other creatures became languid; causing burning fevers, hysterics, and phrensies." The Romans sacrificed a brown dog at the beginning of the Dog Days to appease the rage of Sirius, believing that the star was the cause of the sultry weather.

Today dog days merely refers to a kind of languid, relaxed period where it is too hot to do much more than lay around.