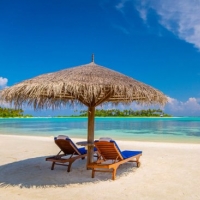 Ever Sit On the Beach and Wonder?

· The High Seas -- areas of the ocean beyond national jurisdiction -- cover almost 50 per cent of the earth's surface.

· An average beach pail, roughly a quart, holds about 3.5 million grains of sand.

· High waves pull sand out into the ocean; small waves bring sand onto the beach and deposit it.

The little black specks that stick to your skin on some beaches are grains of the mineral magnetite, which is magnetic. Animals have more magnetite in their bodies than humans do, which helps them feel when an earthquake is coming