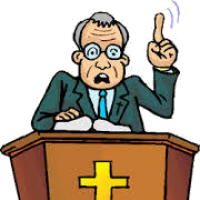 A minister was retiring, and after his final sermon, he stood at the door of his church to say farewell to his parishioners. One old woman told him, “I’m sure our next pastor won’t be as good as you’ve been.”

The minister was flattered but tried to be modest. “Oh, I’m sure he’ll be fine. What makes you say that?”

“I’ve been here for the last five pastors,” said the lady, “and each one has been worse than the one before.”