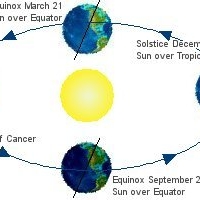 In Canada and the rest of the northern hemisphere, the first day of the spring season is the day of the year when the Sun crosses the celestial equator moving northward (on March 20th or 21st). This day is known as the Vernal Equinox.

A common misconception is that the earth is further from the sun in winter than in summer. Actually, the Earth is closest to the sun in December which is winter in the Northern hemisphere.

The reason for these changes has to do with the Earth's yearly trip around the sun. For part of the year the Earth's North Pole points away from the sun and part of the time toward it. This is what causes our seasons. When the North Pole points toward the sun, the sun's rays hit the northern half of the world more directly. That means it is warmer and we have summer.