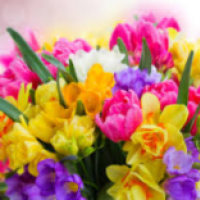 Flowers Know When To Bloom

Scientists have known since the 1930s that plants sense the length of the days and, somehow, use that information to decide when to flower. Russian scientists back then speculated that a mysterious substance must be transported from leaves to shoot tips, stimulating the formation of flower buds. They called the mystery chemical “florigen.”

In 2005, a trio of new studies revealed how it works, including why flowers spring forth in certain spots on a plant. The findings were reported by the journal Science.

“We have now shown that a gene called FT, which is active in the leaf and whose activity is regulated by day length, produces a messenger molecule that is transported to the shoot tip,” said Ove Nilsson at the Umea Plant Science Center at the Swedish University of Agricultural Sciences.

Separate research revealed how the messenger molecule works to activate the “gene programs” that lead to the formation of floral buds. In short, proteins are formed and they talk to other proteins that exist only at the future locations of buds, and flowers are born at just the right time in a preprogrammed location. And why does all this matter to scientists?

Daffodils bloom in spring as the days get longer. Roses wait until summer. Rice, on the other hand, flowers in the fall as the days shorten. Nature does fine, of course, but humans sometimes want to fool her.

“It is interesting to speculate that this finding could be used to make early flowering rice,” Nilsson said. “Since many of the high yielding varieties are late flowering this could in certain parts of the world allow the production of more than one harvest per year.”