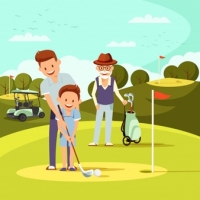 The summer months are the prime golfing season. The origins of this popular (and frequently frustrating) game are unclear, though some historians trace it back to an ancient Roman game called paganica, in which players used a bent stick to hit a leather ball.

A stained glass window dating back to 1340 in Gloucester Cathedral in England shows someone swinging something that looks like a golf club. And a Ming dynasty scroll, also from the 14th century, depicts a member of the Chinese imperial court swinging a golf club-like implement at a small ball with the apparent aim of sinking it into a hole.

The modern version of the game, played over 18 holes and without interference from other players, was developed in Scotland. The word “golf” comes from the Scots “gouf,” and is considered to be a local equivalent to the Dutch “colf,” meaning stick or club.

Golf was banned in 1457 by King James II of Scotland because he worried that it was distracting the citizenry from archery practice, which was considered more urgent for military purposes.

Though controversial for many years (Mary, Queen of Scots, was criticized for playing it), restrictions eventually eased and the game spread across the British Isles and around the world.