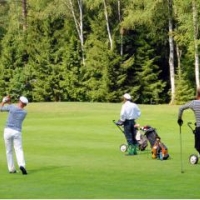 A game that’s been around for centuries, golf has evolved its own etiquette that might not be obvious if you haven’t played previously. There are a handful of things to keep in mind if you’re a new golfer that will make the experience easier for you, and your playing partners.

Golf has a lot of rules—but the number one objective of the game should be for the players to always enjoy themselves. With an influx of new golfers coming to the game with golf as one of the few sports open during the pandemic, there is a basic etiquette most golfers adhere to.

Here are some things to consider when you are teeing it up this summer:

You are what you wear

Many golf courses have increasingly relaxed their rules around apparel, but one of the great joys of golf is dressing the part. Be aware that some courses will insist on a certain length of socks, shorts, and a collared polo are expected at many courses.

Consider your playing partners—Where you stand on the tee when you’re not hitting should be given some consideration. Most golfers don’t like their playing partners standing directly behind them, while some don’t mind. Figure out what feels correct early on—or ask—and follow that throughout the round.

When to tee off

The rules would suggest the player with the lowest score on the previous hole is the first to tee off. It is called “having the honour.” That said, as the emphasis is increasingly on playing quickly, often times the first player ready to hit—generally called “ready golf”—will simply tee off. The same can be said throughout the round. Safety always comes first, but generally, if you have the opportunity to take a shot, you should be prepared to take it.

You’ve finally gotten to the green. Congrats. You might even have a birdie or par putt.

But the putting surface has a number of rules and its own unique etiquette that you have to consider:

Typically, the person furthest from the hole, is the first to putt, and you progress until the person closest to the hole. That said, recent moves to speed up play means the player furthest away from the hole putts first and completes the hole, regardless of whether it takes one or four putts. You’ll also want to avoid standing in the putting line of your playing competitors, and try to avoid standing on the line beyond the cup, in case they miss and need to make a putt from past the hole.

When to pull the flag

Before Covid-19, the flagstick could come out or stay in depending on the preference of the golfer. These days it stays in all the time—at least for now—but standard etiquette suggests you ask your playing partners whether they’d like the flag in or out and move it out of the lines of anyone putting.

Take care of the course

Whether you’re on the fairway and take a divot, or make a pitch mark on the green, it is expected that you’ll do your best to repair the damage. That means replacing divots, and fixing pitch marks on the green. Think of it as paying it forward so the next golfer will have a great fairway or putting surface to play from.

You can have fun on the course such as playing music if your partners are good with it. But be aware that many like it quiet when they are hitting the ball, or making a putt. Check with your playing partners and find out what they like and expect, and follow along. That also means turn off your phone—put it on silent—and only take a call when it is absolutely necessary, and when you can ensure you’re not holding up your group.