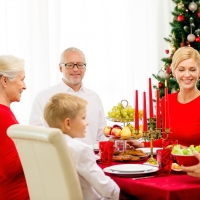 How to Get the Kids to Visit

An elderly man living in Phoenix calls his son in New York and says, “I hate to ruin your day, but I have to tell you that your Mother and I are divorcing.  Forty-five years of misery is enough.”

The son gets all excited and responds, “Pop, what are you talking about?  You can’t divorce Mom after all these years.  That’s crazy.”

“It may be crazy,” says the old man, “but I am going to tell her on Christmas Day.  It will be the last one we spend together!”

Frantically, the son calls his sister in Chicago and she explodes.  “Like heck they’re getting a divorce!  We’re both going to fly to Phoenix tomorrow and talk some sense into Dad!  I don’t care if it is the holidays!”

Then she calls her father and shouts at him over the phone.  “Do you hear me?  Don’t you dare do a thing until brother and I get there tomorrow.”  Then she hangs up.

The old man hangs up his phone and turns to his wife.  “OK,” he says with a smile, “they’re coming for Christmas and paying their own way!” – From IdeaBank