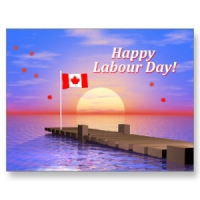 Labour Day in Canada is celebrated on the first Monday of September and it is a federal statutory holiday. It is also observed in the United States on the same day.

This holiday officially celebrates workers and the labour union movement, however, most of us only think of it as the last long weekend of the summer, a perfect occasion for one last BBQ or canoe trip.

Many seasonal attractions and vendors close after the labour day long weekend and it is generally the start of the fall shoulder season for tourist attractions.

It's a very straightforward holiday, unlike other holidays when some people are off and some aren't, on Labour Day all stores are closed including retail stores, banks and libraries across the country. Some restaurants and convenience stores may be open.

The Tuesday day after labour day marks the first day of school.