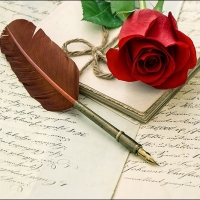 Love Can Conquer All

In 1844, Robert Browning was an unknown poet and playwright when he first read Elizabeth Barrett’s volume of poetry titled Poems. He was 32 years old. Elizabeth was a well-known poet– and invalid. She was 39 years old.

Robert was so moved by her poetry that he wrote to her, “ I love your verses with all my heart, dear miss Barrett..” The two of them commenced writing more than 600 letters to each other during the next 20 months.

Elizabeth had suffered since the time she was a teenager from uncontrollable spasms of pain and breathing difficulties. She had been a shut-in for years and a spinster as well, for her father was a very controlling, wealthy man who had forbidden all of his 12 children to marry.

Robert began to court Elizabeth, but at first she didn’t take him seriously. She found it hard to trust his intentions because she had been Isolated for so long and because she questioned the treatment of women inside the institution of marriage.  Despite these almost overwhelming obstacles, Robert continued to court her with passion.

Finally with Roberts encouragement, Elizabeth left the room she’d spent the previous six years of her life. She began to go outside and live an active life again, and cut back on the medication prescribed for her pain. In 1846 Elizabeth and Robert wed in a secret ceremony. When her Father found out he disinherited Elizabeth.

The next 15 years were spent together writing poetry. Their courtship inspired some of the most beautiful poetry ever written such as “How do I love thee? Let me count the ways”.

Elizabeth died in her husbands arms in 1861.

This February Celebrate your own love story!