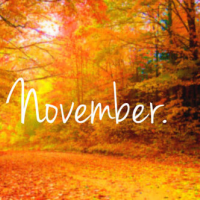 November 1st, 1959 - After being hit in the face with a hockey puck, Jacques Plante, goalie for the Canadiens at the time, created the hockey mask out of fiberglass and resin.

November 3rd, 1718 - The birth of John Montague, Fourth Earl of Sandwich, who hit upon pairing bread and meat slices to sustain him through lengthy gambling sessions.

November 7th, 1885 – the first transcontinental railroad across Canada, concluded with the driving of the "last spike" in Craigellachie, British Columbia.

November 9th, 1989 – The destruction of the Berlin Wall ended nearly three decades of a divided city.