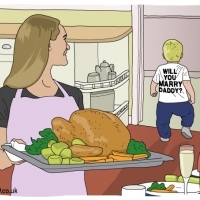 Pickled onions, bedroom doors and wedding proposals: the most heartwarming gifts people have received at Christmas

This year my list is a little different to my usual requests. I would like a fence to go around our front garden, so that the kids can play on their bikes and scooters without me worrying about them.

I’ve realised that my favourite Christmas present as an adult was given to me the Christmas after my mum died. The day was pretty quiet, but we were trying to be jolly for my nephews and nieces who were with us and young at the time.

My boyfriend Dan, now my husband, had gone overboard on presents in an attempt to divert from the silence. I opened this large frame: inside was the alphabet embroidery cross-stitch that my mum has started for me when I was born. The year before she died, she dug it out and tried to finish it off. Dan had conspired with my dad, taken the 28-year-old cross-stitch to a shop, and had it framed. When I ripped off the paper and saw what it was I sobbed. It really was the best present ever, hours of work my mum had done and a thoughtful present from Dan. I now have three boys who love and enjoy Granny Rosie’s alphabet. She would have adored that. And what about other people’s most memorable gifts?

A Christmas miracle Lynley remembers her most heartwarming Christmas nearly 20 years ago. Her father-in-law had what the doctors thought was a brain stem stroke just before Christmas. They said there wasn’t much hope of recovery and the unspoken inference was that the only reason they weren’t asking to turn off the life support was because it was Christmas. The week was spent with family coming to say their goodbyes. There was no change and they spent Christmas Eve in the intensive care unit. Her husband stayed the night at the ICU, while Lynley stayed nearby with family. They were sleeping on the floor at their in-laws’ house nearby and were woken very early on Christmas morning by the phone ringing. Lynley couldn’t move thinking it would be the worst possible news. Then she heard her mother-in-law laughing. He had woken up and started talking; it turned out not to be a stroke but a very rare condition, though the family weren’t to know that for a while though. It was like the most amazing Christmas miracle, and gift, ever.

Say it with onions Jenny Hall remembers her eldest daughter buying Garner’s pickled onions for her last Christmas, knowing that they were her favourite. The thought he had put into the present made her very happy

A festive proposal Helen Manchip was amazed to see her son walk into the kitchen with a different T-shirt on one Christmas Day morning. When he turned round, the back said ‘Will you marry Daddy?’ She said yes and they popped open some champagne.

Three’s company Zoe Potts, a triplet, remembers sharing a room with her siblings. Her parents had very little money and one year for Christmas the triplets woke up to find that they had a door to their bedroom. Up until then her parents couldn’t afford to buy one and they had never had any privacy.

When buying your presents this year, perhaps think about what may create a lasting memory: a present to hold on to.