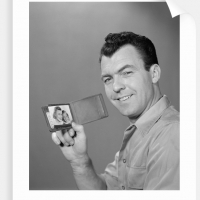 According to a story, the artist Pablo Picasso was traveling by train one day when a fellow passenger struck up a conversation with him. As they chatted, the passenger told Picasso that his paintings would be better if he concentrated on realistic images instead of abstract art.

When Picasso asked for an example, the traveler took out his wallet and showed him a snapshot of his wife. “See? That’s exactly what she looks like.”

Picasso held the photo in one hand. “She’s very small.”