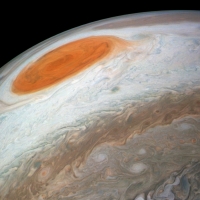 The Great Red Spot of Jupiter has long puzzled astronomers. A storm in Jupiter’s atmosphere has kept it going for almost two hundred years—why has it persisted?

Scientists now think they know the answer. Instead of just a turbulent mass of gases swirling horizontally over the planet (which would sustain the spot for only a few decades), gases spouting vertically seem to be responsible for the spot’s longevity.

Earlier analyses of the Jovian winds discounted the effects of vertical plumes. But a team of astronomers from the University of California at Berkeley and Harvard calculated precise wind speeds for the vertical streams, and found that they could keep the Great Red Spot going for as long as 800 years. Gases spewing from the top and bottom of the spot loop around, picking up energy from jet streams and then diving back into the conflagration in an activity that keeps the storm—and the spot—constantly replenished.