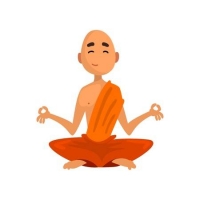 A legend tells of a French monastery known throughout Europe for extraordinary harmony due to the leadership of a man called Brother Leo.

Several monks from another monastery began a 5-day pilgrimage to visit Brother Leo to learn his leadership secrets so they could bring peace and harmony to their own monastery, which was a place of some bickering.

As they began their journey, almost immediately, they began to bicker about who should do various chores each time they made camp or packed and unpacked.

On the third day they met another monk who was also going to the monastery, and he joined them. When it came to chores, this monk never complained or shirked a duty, and whenever the others would fight over a chore, he would gracefully volunteer and do it himself. By the last day, the others were following his example, working together smoothly.

When they reached the monastery and asked the gate keeper if they could see Brother Leo, the man laughed and pointed at the extra monk. “But Brother Leo is right there among you!”

I don’t know if that’s practical in today’s corporate or political world, but it’s worth thinking about