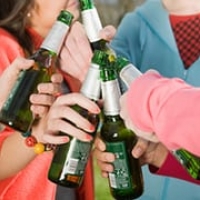 Here’s another reason to warn adolescents about the dangers of drinking:  According to a report by the American Medical Association, the brain appears to be  especially susceptible to alcohol damage during a person’s high school and college years.  While the brain physically stops growing when a person reaches the age of five, its cells continue to refine and realign themselves until a person is 20 years old.

The late-teen/early adulthood period is recognized as prime drinking years for many.  As a result, the consumption of alcohol – whether moderate or heavy – could bring about long-lasting brain damage, especially in regard to memory and critical thinking.

Teen drinkers are particularly vulnerable in two areas of the brain: the hippocampus, which is responsible for the brain’s memory, and the prefrontal cortex, which is paramount in decision making.