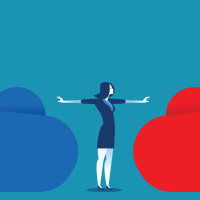 The Art Of Solving Conflict

After World War II, Gen. Dwight D. Eisenhower served for a time as president of Columbia University. According to one story, a committee of faculty members asked him to issue a rule prohibiting students from walking on the grass in the main quadrangle.

Before issuing a statement, he asked, “Why do they walk on the grass?”

“Because it’s the shortest way to the central hall from the entrance,” the committee    answered.

“If that’s the way they are going to go,” he said, “then cut a pathway there.” Eisenhower knew that when someone is doing something a certain way, it’s often valuable to understand why and to adjust, rather than to stubbornly refuse to change.