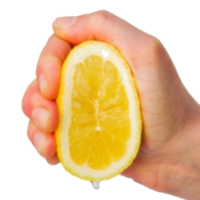 Every year a contest was held at the county fair to determine the strongest person in the region.  The contest was simple.  Each contestant was given a lemon to squeeze, and the person who squeezed out the most juice would win.

One year the favourite contestant was a local farmer, who milked a herd of cows each day and had enormous, well-muscled hands.  He produced nearly a full glass of juice from his lemon, much more than everyone else.

The judges were just about to award the farmer the prize when a small woman with gray hair and a cane stepped forward and asked for a lemon.  The crowd snickered – then stopped when she squeezed out enough juice from one lemon to fill a gallon jug.

As she collected the prize, the farmer asked her how she developed such squeezing ability.

“Honey,” she said, “I used to work for Revenue Canada.”