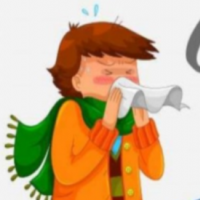 Cold season is coming. Most colds begin in late August or early September, increasing slowly for a few weeks, then remaining high until March or April. The increase may be due to the opening of schools and to cold weather, which prompts people to spend more time indoors and increase the chances that viruses will spread from person to person. Also the most common cold-causing viruses survive better when humidity is low—during the colder months of the year. Cold weather also may make the nasal passages' lining drier and more vulnerable to viral infection entering the body.

Hand washing is the simplest and most effective way to keep from getting rhinovirus colds. Not touching the nose or eyes is another. Other than breathing in someone else’s sneeze—hand to face contact is the most common way of transferring the virus into your body.

Individuals with colds should always sneeze or cough into a facial tissue, and promptly throw it away. Also, because rhinoviruses can survive up to three hours outside the nasal passages on inanimate objects and skin, cleaning surfaces with a disinfectant might help if someone in the house has a cold.