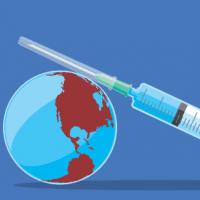 The Origin of Vaccinations

Vaccinations can be controversial, but the practice developed as a successful response to a deadly disease—smallpox. An epidemic hastened the decline of the Roman Empire, killing 7 million people in A.D. 108, and the disease decimated native and immigrant populations in the New World. During the 18th century, 400,000 Europeans died of smallpox, and survivors were often left blind or disfigured.

The British aristocrat Lady Mary Wortley Montague, who had suffered facial scars from smallpox, had her 5-year-old son inoculated against the disease when her husband was stationed at a diplomatic post in Istanbul. Upon her return to England, she had the embassy physician, Chares Maitland, demonstrate the effectiveness of the practice by having her 4-year-old inoculated in the presence of royal court physicians.

The term “vaccination” comes from Edward Jenner, an 18th-century British physician who experimented with cowpox, a less-threatening disease that appeared to confer immunity from smallpox. The word derives from the Latin “vaca,” which means “cow.” In the 19th century, French scientist Louis Pasteur further developed the technique to prevent the spread of anthrax.