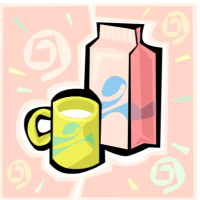 You may want to give gum-chewing a second thought. Researchers say chewing stimulates signals in the learning center of your brain and may help you save your memory as you age. Chewing gum also burns 11 calories an hour.

Here are some other foods that have healthy surprises:

Tea is good for your bones. Researchers first thought that because tea contained caffeine it would deplete the calcium supply, which could lead to weaker and brittle bones in old age. But more recent research proved that tea drinkers actually had a 10 to 20 percent lower fracture risk than non-tea drinkers. Scientists believe that isoflavonoid chemicals in tea may reduce the deterioration of bones and the risk of osteoporosis.

Milk helps you lose weight. Despite the belief that milk has too many calories, researchers have found that low-fat, high-calcium foods may actually burn fat. It seems that extra calcium increased metabolism in mice when they took a human equivalent of 1,600 milligrams of calcium, cutting body fat 42 percent and weight by 19 percent.