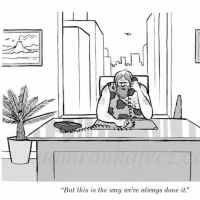 We’ve Always Done It That Way

A management consultant was hired by a manufacturer in Britain to help improve its general operating efficiency. At one plant on the outskirts of London, she spent weeks reviewing reports that tracked productivity, absenteeism, machine failure, et cetera, that were kept by the day, week, month and year.

The reports were filled out by hand (the plant was small) on photocopied forms. At the top of one of the daily forms, the consultant noticed a small box that was always filled out with the number zero, but the form had been photocopied so many times that the instructions beneath the box were just small black spots that were impossible to read.

As the consultant finished her work, she was looking through a dusty file cabinet when she discovered what looked like the original form. She saw that it dated back to World War II. Intrigued, she looked at the form to see what important data the box was meant to track, and how it might be relevant to the plant’s current operations.

Then she realized the flaw in “We’ve always done it that way.”

Underneath the box were clearly printed the words:  “Number of air raids today.”