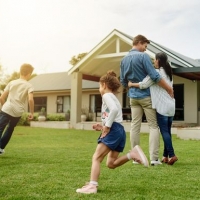 The average interest on a 30‑year fixed-rate mortgage dropped to the lowest level in almost 50 years this week—and it's giving the housing market a jolt.

Mortgage rates have just dropped to the lowest level in almost 50 years, compelling both homeowners and home buyers to get off the couch to take advantage of record-level savings on their mortgage.

“The average 30-year fixed-rate mortgage hit a record 3.29% this week, the lowest level in its nearly 50-year history,” said Sam Khater, chief economist of mortgage giant Freddie Mac. “Meanwhile, mortgage applications increased 10% last week from one year ago and show no signs of slowing down."

To put this record rate in perspective, 3.29% even dips below levels seen during the housing crisis. The average 30-year fixed-rate mortgage dropped to 3.31% in 2012.

This news comes in the wake of the Federal Reserve's decision on Tuesday to slash short-term federal interest rates by 50 basis points in an attempt to steady markets rocked by coronavirus fears. (A basis point, which is used to describe a change in percentage, is the equivalent of 0.01%.)

"A 50-basis-point cut in interest rates is very substantial. The Fed hasn’t cut rates like this since 2008," says Tony Julianelle, CEO of Denver-based Atlas Real Estate. "This is a fantastic time to look at refinancing or purchasing property."

What record-low rates could mean for mortgage borrowers

Record-low mortgage rates are the Black Friday sale of housing—after all, even a one-tenth of a percentage point rate difference can amount to thousands of dollars saved over the life of a 30-year loan.

"Refinances have already spiked, and most lenders are reporting a surge in overall applications," says Julianelle.

"If you have a mortgage rate in the 4%-plus range, it likely makes sense to refinance," says KC Conway, Alabama Center for Real Estate's director of research and chief economist of CCIM Institute, a real estate educational body.

That said, he continues, "this rate cut has a more stimulative impact on home equity lending, where homeowners can borrow really cheap to finally do a home improvement project or use the equity to pay off credit cards or a car."

But not all refis are a good idea.

"It’s important to shop interest rates, because when volume increases like this, some lenders will hold rates higher to help throttle the demand back and not overload their own processes and systems," Julianelle warns. "Others who may be more automated or flexible will drop rates more to gain market share."

Homeowners aren't the only ones who might be drawn out of the house to survey their options. Low mortgage rates might also "entice home buyers out to shop as well," says Danielle Hale, chief economist at realtor.com. "That's certainly the Fed's hope."

"We will see a mini housing boom the rest of the year," says Todd Huettner, a real estate and personal finance expert and president of Huettner Capital, in Denver. "It may get some people off the fence and motivate those that had not looked over the winter. I think it will take a little longer to draw people off the sidelines, but that should happen by the time the traditional buying season kicks off in a few months."

Buyers who dive in to home shopping now, however, will reap the most gains.

"I would characterize this week's rates as Christmas in March," says Conway. "Rates at these historic lows truly is March madness. The catch is, low rates are great for now, but they could reverse in the spring or late summer if the virus results in such an economic slowing that we see job layoffs."

Make that two catches: The big problem for housing has been a lack of supply, not a lack of demand, Conway adds. So as lower rates stimulate even more demand, prices are likely to go up.

Lack of inventory aside, might fear of the COVID-19 virus keep home buyers from heading out?

"Unless the virus becomes a real issue in their community, I don’t think this will affect home buyers," Huettner says. "People may avoid an open house, but home buying is not like attending a large sporting event, going on a cruise, or sitting on a plane where you are in close proximity to a large number of people in a relatively small amount of space."

"It won't be in place long term, and will be extracted when the virus abates in the late spring or summer," says Conway.

"Do everything in your power to move before November," urges Washington, DC–based real estate agent Cedric Stewart. "If you're considering buying or selling in the next 12 to 24 months, adjust that timeline to the next seven to eight months. The potential savings on a 30-year mortgage now versus a higher rate make this worth considering breaking a lease, postponing a vacation, or moving up plans."

All that said, in the same way you don't buy a boat or blender just because it's on sale, you shouldn't buy—or refinance—without thoroughly considering your personal circumstances. If you're a homeowner, check a refinance calculator to see if it really makes sense to refinance now. While you might save money on interest, refinancing entails closing coststhat can run in the thousands.

"Calculate what it costs to refinance—closing costs—and what you’d save monthly, and then determine how many months it will take to earn back what you invested in the refinance," says Julianelle. "If that number is low and you intend to own that home longer than the return time period, it may be worth doing."

If you're tempted to buy a home, make sure to check a home affordability calculator to get a sense of what price house you can afford. Because no matter how low mortgage rates go, "there is never a perfect time to buy," says Richard Murdocco, who teaches in the public policy graduate program at Stony Brook University and is the founder of the real estate site The Foggiest Idea.

"I am a firm believer in looking at what's on the market and sticking with what you can comfortably afford," he says. "Mortgage rates are always going to be a bit of a gamble."