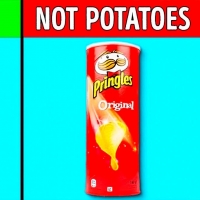 However, due to the fact that they only contain about 42% potato based content, with most of the rest being from wheat starch and various types of flour, including corn and rice flour, the U.S. Food and Drug Administration made them change the name because their product didn’t technically meet the definition of a potato chip.

Their use of the word “chip” was also restricted, forcing them to use “crisp” instead—which got them into further trouble in the UK.