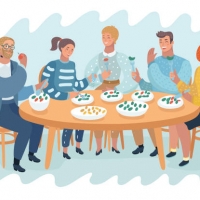 You may know how and why the company you work for was founded, but do you know where the word “company” comes from? According to Charles Earl Funk’s book Thereby Hangs a Tale (HarperCollins), the word comes from a combination of the Latin word con, meaning “together,” and panis, which means bread. Thus, “company” originally described a group of people who shared their bread with each other. Think of that the next time you’re eating lunch with your co-workers.