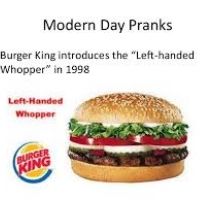 1998: Burger King published a full page advertisement in USA Today announcing the introduction of a new item to their menu: a "Left-Handed Whopper" specially designed for the 32 million left-handed Americans.

According to the ad, the new whopper included the same ingredients, but rotated 180 degrees for the benefit of their left-handed customers.

The following day Burger King revealed that although the Left-Handed Whopper was a hoax, thousands of customers had gone into restaurants to request the new sandwich. Simultaneously, according to the press release, "many others requested their own 'right handed' version."

The lack of money is the root of all evil.   ~ Mark Twain