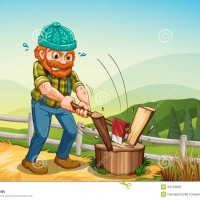 Two men were competing in a tree-cutting championship.  One of the men was very ambitious and hardworking.  The other was not so ambitious or hardworking, but still very good at what he did.

While the go-getter was chopping down every tree he could at the fastest pace possible, the other was cutting down trees methodically.  The hard worker toiled through the day.  He never took lunch.  As for his rival, he took an hour-long lunch, then resumed the race.

In the end, the man who took lunch and did not work as hard won the race.  This upset the challenger, who thought he deserved to win.  He went up to the winner after the race and said, “I don’t get it.  I worked longer and harder than you did.  I didn’t take a lunch, but you did.  And yet you won. It doesn’t seem fair.”

The winner responded, “While I was taking lunch, I was also sharpening my ax.”